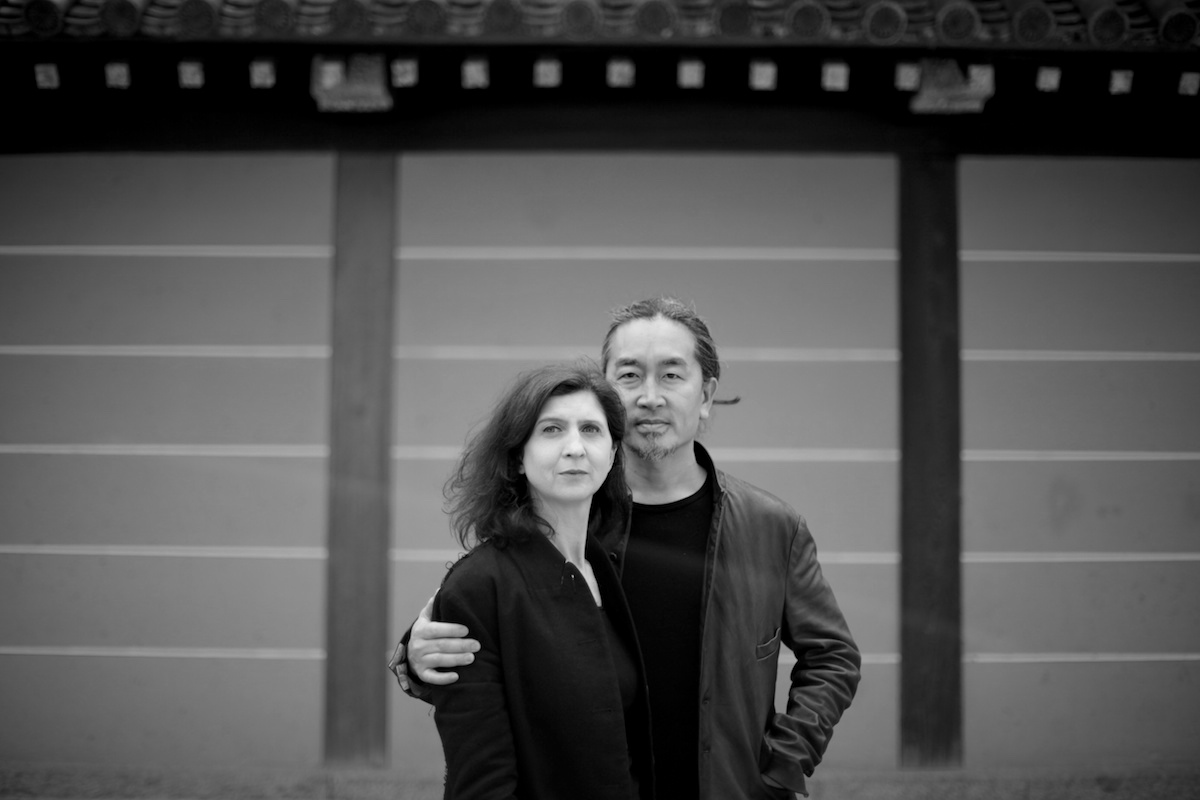 Please tell us about the background of KYOTOGRAPHIE, and how it was initiated.

Lucille (L): Throughout our lives we have both travelled extensively, and once we arrived in Kyoto, we were so overwhelmed with the atmosphere of the city and its surrounds, we felt that creating something different for Kyoto would be a great opportunity. It came at a perfect moment, both Yusuke and I were at a point of transition in our lives, Japan had undergone a big wake up, and we were thinking about how we could move forward, creatively. We wanted to imagine something inclusive, international, and artist made. In France there is a beautiful festival called the Arles International Photography Festival, it was founded by artists in the early 1970s, it has served to introduce, promote, and support photographers. This festival was always a great inspiration to me as a young photographer. Japan is rich in talented photographers, and it seemed unfortunate that there were not many opportunities to value them. We wanted to create a stage in Japan, which could introduce meaningful works and give value to photography. Photography is such an amazing medium because it transcends the barriers of language to convey a very strong and direct message. Through photography, we wanted to give the possibility to share various stories and address social and cultural issues. We wanted to build a platform that could inspire people to make the world a better place.

Yusuke (Y): When the Great East Japan Earthquake and the Fukushima nuclear power plant accident occurred in 2011, I realized the dangers of everything being concentrated in Tokyo. Also, I thought that it was important to be aware of what is going on in this country, and in the world, and be decisively self-conscious of how information is manipulated or hidden from us. As a means to deal with such circumstances, we decided to establish our own media. Photographs have the ability to communicate what is happening directly and this influences the way the people see the world, so my ideas about setting up a photography festival were complementary with Lucille’s thoughts on photographic culture.


Why did you choose Kyoto City as the stage of the festival?

Y： We thought Kyoto would be a perfect stage to convey our message, nationally and internationally. Kyoto is one of the most attractive locations in Japan and draws an incredible international attention. It is similar in size to a European city, seemed an optimal choice for incorporating the entire city as the stage of the festival. We thought that if we held the festival in Kyoto, we could not only present the value of photography in an international context, but at the same time communicate various messages, such as the magnificence of Japanese culture and architecture, the aesthetics of technology and traditional arts and crafts, as well as state-of-the-art technology. I think this itself is the unique feature that distinguishes KYOTOGRAPHIE from other photography festivals.


Please tell us about the rewarding aspects and the difficulties you faced in organizing a photography festival in Kyoto.

L： At the beginning, we were lost, the way of in Kyoto is very unique. Nevertheless, thinking of how we could overcome this had given us a sense of order and enabled us to eventually understand how things are organized. Kyoto is like treasure box. When you open it, you discover new things everyday. Living in a such a city is a really gift. I lived in Bamako, Mali as a child and went back regularly to Africa as a teenager, finally moving there by myself when I was 20. I stayed there for a few years to travel around until I moved to the North of Togo in 2001. I feel that the experience of living in Africa has helped me in becoming accustomed with new places and new systems very quickly. I also appreciate there being temples and shrines in various cities throughout Japan, a sense of animism or worship of nature. I quickly connected with Kyoto City, its shrines and temples becoming sacred bridges between the ancient capital and I. Religious rituals are part of daily life and I was enchanted by the floating spirituality. This presence helped us to connect deeply with the environment and create a unique connection to the people.
Y： I am not sure if I should say this, but I think Kyoto is the most difficult city in the world. Since I am not from Kyoto, I was not accepted into the community at first. I realized however, that in Kyoto there are rules that are unique to Kyoto, and that the people in this city truly value history and quality. I think KYOTOGRAPHIE developed its status as a festival successfully because it is held in Kyoto, and due to the fact that we were constantly engaged to keep up a level of quality appreciated and accepted by the people of Kyoto. Kyoto, while maintaining tradition, has always been actively engaged in pursuing avant-garde expressions. It was because of this remarkable characteristic that we became involved, as well as further draw out this aspect of innovation. In that sense, I think Kyoto was a great stage for us to present our ideas.


Was there anything that you found impressionable?

L： The people in Kyoto don’t express themselves directly, therefore there are numerous rites of passage that one must overcome to achieve a sense of trust and confidence. Nevertheless, if you come here with a pure mindset and respect Kyoto peoples’ values and sensibility, it is surely possible for anyone to encounter the city’s treasures from the past, from its wonderful wisdom, aesthetics, senses and universal aspects.
Y： We were two unaffiliated individuals, a photographer and a lighting artist, neither of us had any experience or funding. We began to start something that was seemingly overambitious. Though it was something that appeared impossible to realize, we were able to come so far thanks to the cooperation and support of various people. Working with people in Kyoto was difficult in the beginning but since then people have provided support, people cooperating from businesses, people from overseas, artists, our staff, enabling us to miraculously realize this event. This is something that keeps surprising me every year. I understood that if we are able to share our awareness it is indeed possible to gather the support of various people to realize your ambition.


The theme for this year’s KYOTOGRAPHIE is “LOVE.” Why did you choose this theme?

L： Love can give you the power and strength to accomplish the most beautiful and crazy things. Love has the power to take you beyond your boundaries but at the same time, in so many situations, love is a distraction and can turn people crazy. That’s why during the festival we wantpeople to think about love and try to understand each other on a deeper level. Love is essential and is the very source and power of photography itself. In Japan, people tend to be more reserved in expressing their love and do not openly talk about it. The theme “LOVE” is especially meaningful in Japan and so much needed in such a time the world is facing. Sharing love triggers for society to talk more and understand more about each other. That’s the role of this festival.
Y：We chose our themes from what had happened through the world over the years. Many things happened last year, and we thought that there was not enough love around. Through KYOTOGRAPHIE we want to constantly consider social and environmental issues, and thus through the selection of works and the theme of love we hope to convey various messages. The world we live in seems complicated but is in fact very simple, and I believe that with the power of love we can overcome anything. We hope that visitors will be able to feel this sense of hope.


Please tell us what plans you have for the future.

L： We want to continue to surprise the people and ourselves through the festival. Hopefully, KYOTOGRAPHIE will continue to bloom every spring in our beautiful Kyoto!
Y： Through KYOTOGRAPHIE, we hope we can contribute to bring about changes to our world. If Japanese people are able to think with their own minds, they can lead their lives without being swayed by media or politics. In order to create such a world, KYOTOGRAPHIE with continue to constantly raise questions, and it is also willing to challenge taboos and venture into new frontiers if it is to bring about changes for the better. This is something that will never change. When we were children there was more sense of surprise in our lives. Now in our current world where there is an overload of information, I believe that there are less opportunities for us to encounter things we have never see before or be taken by surprise. That is why we want to move people, leave and impression, and deliver surprise. This is something that we are devoted to no matter the times. We would like to continue proposing various things to the people who make the effort to come to KYOTOGRAPHIE in search of something both from Japan and from abroad.

Lucille Reyboz
Photographer. Born in 1973, Lucille Reyboz began her journey with photography in Africa, where she spent most of her childhood, and discovered Japan in 1999, invited by Ryuichi Sakamoto to collaborate on his opera “Life”. A portrait photographer, Lucille Reyboz also produced numerous record covers for labels such as Blue Note and Verve. While developing a prolific photography practice, she exhibited her work around the world, most notably in Visa pour l’image (2001), Phillips de Pury in New York (2007) and CHANEL NEXUS HALL, Tokyo (2011). She published several books, including Batammaba by Gallimard, Source, Belles de Bamako and Impressions du Japon with Keiichiro Hirano by Editions de la Martinière. Lucille Reyboz now lives and works in Kyoto, where she co-founded KYOTOGRAPHIE with Yusuke Nakanishi in 2013.

Yusuke Nakanishi
Lighting Director. Yusuke Nakanishi was born in 1968 and is a lighting artist who travels the world, and expresses his impressions of light and shadow from his memories. He has worked as a lighting director for feature films, stages, music concerts, fashion shows and interior designs. He also created the Eatable Lights object series, and has exhibited installations at the Hara Museum, the School Gallery Paris, and Nuit Blanche Kyoto.